By Sara O'SheaFebruary 20, 2016Japan
No Comments 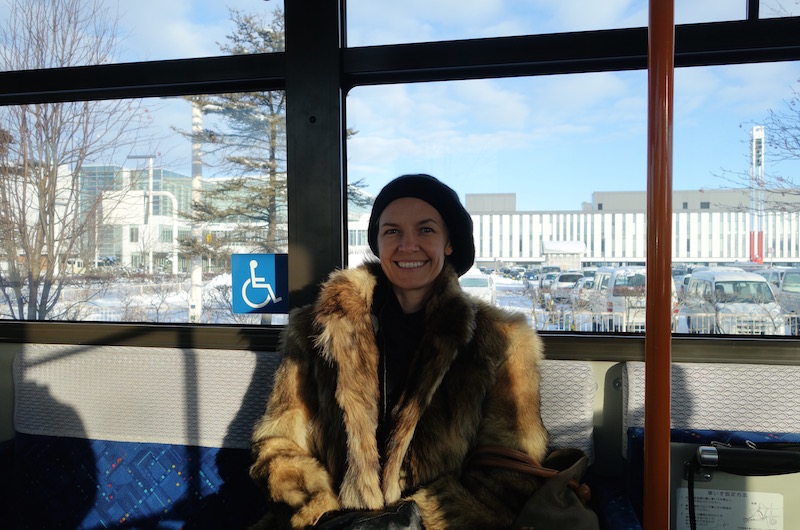 We booked a trip for the 15 January 2016 for 1 month in Niseko, Japan. We flew from the Gold Coast on Jetstar with an 8 hour stop-over in Tokyo. From here we only had a 2 hour flight to catch to Sapporo and we were almost there. Japan is only two hours behind Australia’s East Coast summer time and is only a 10 hour flight away. From Hong Kong it’s a short 4 hour flight with direct Hong Kong to Chitose Airport flights with Cathay Pacific. From Singapore it’s approximately 8.5 hours flight time via Tokyo. You usually leave home one day, and after a good night’s sleep, you’re skiing or boarding the next day! (depending on airline itinerary). 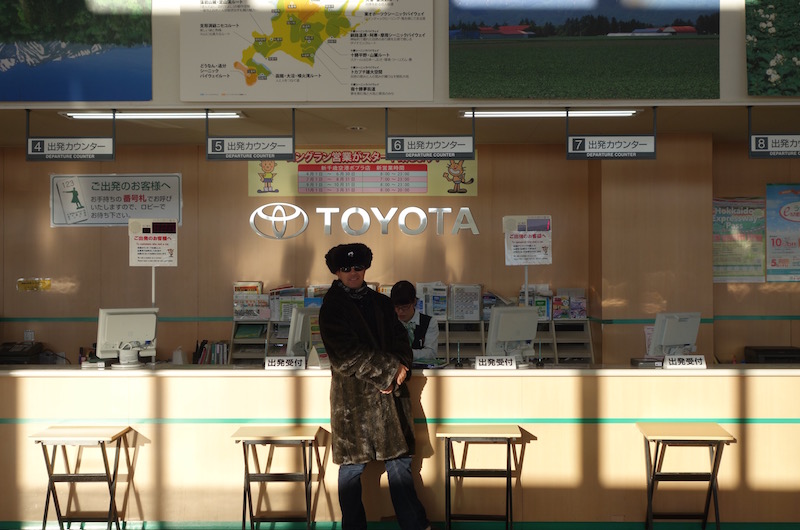 Hiring a car prior to arrival in a must. We booked one when we were in town in October which was a smart move as the cars book out in the peak season. After you arrive head to the rental car counters and from here a bus will collect you and take you to the car yard to collect the keys. 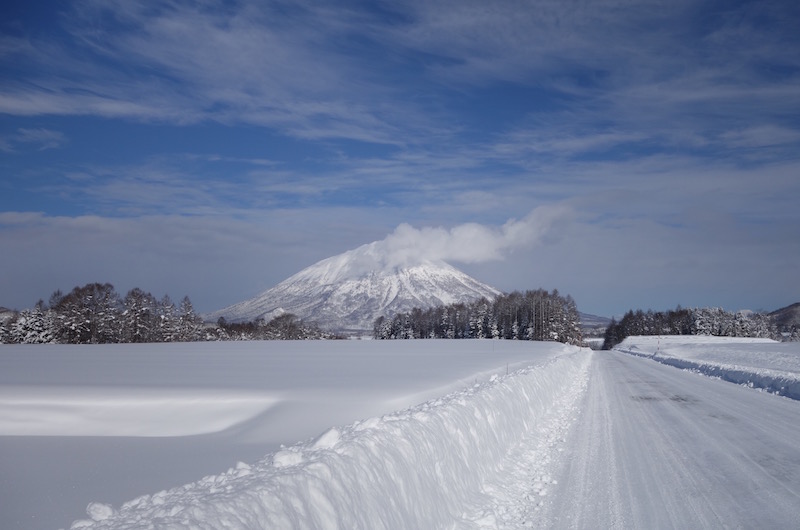 The drive to Hirafu is beautiful and we were extremely lucky to have a blue bird day. Niseko is made up of 5 different resorts: Annupuri, Higashiyama, Hirafu, Hanazono and Moiwa. 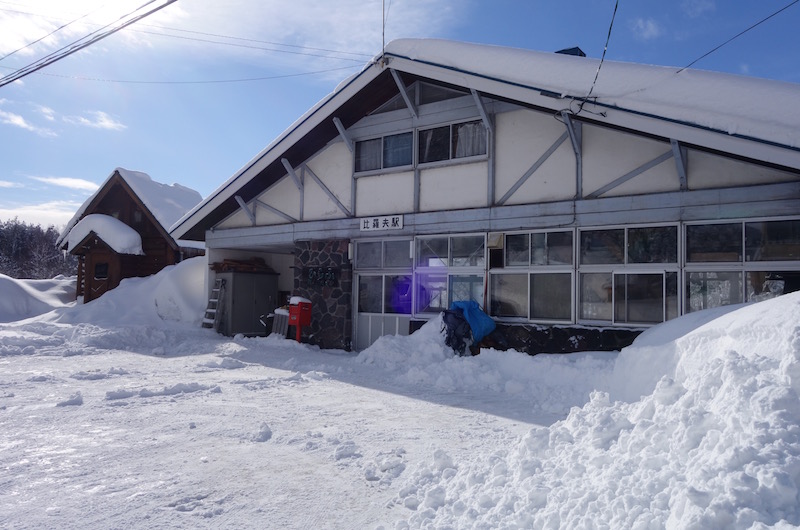 Driving into Hirafu we passed the cute Niseko train station. A word of warning… don’t catch the train here if you are planning to make your way to Hirafu. Get off at the Kutchan station as you’ll be able to catch a taxi easier then Niseko station.

Two hours later we were in Hirafu. Arriving at our chalet for the month we were super excited to be able to settle in and unpack. 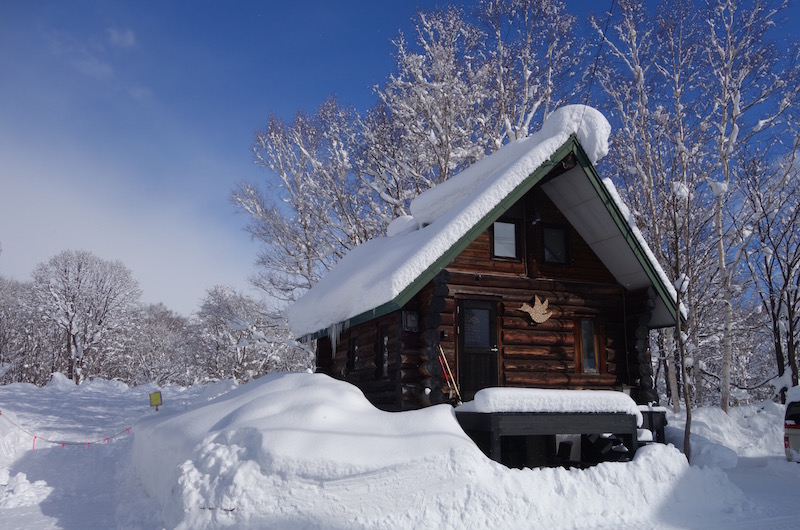 Walking around town was cold but great fun. Al and I always love exploring a new town. Niseko is regarded as one of Japan’s top 5 resorts. Equipped with an efficient lift system, mostly gondolas and covered chairlifts so even on the most extreme blizzard days, you can ride in comfort. 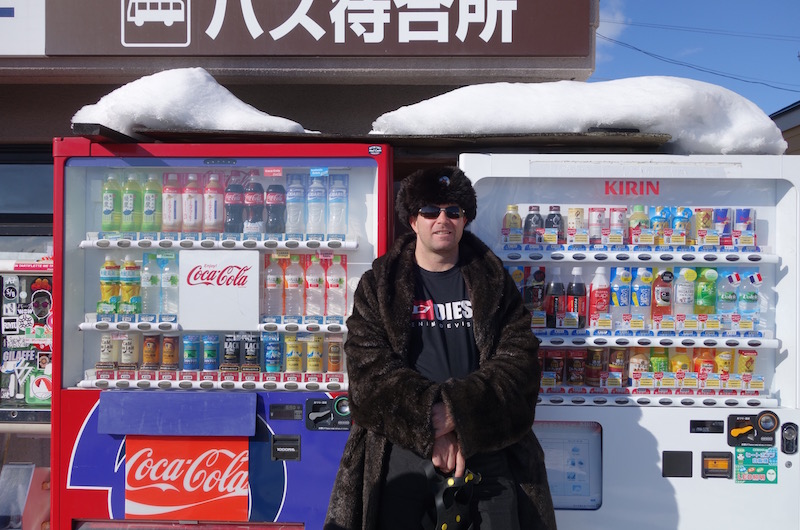 The country has the highest ratio of vending machines to landmass in the entire world. As the country’s official tourist organization points out, Japan is currently home to 5.52 million vending machines. That’s a lot. This is the Welcome Centre where all of the buses from Sapporo and Chitose airport stop. We recommend booking on the Winter Niseko Airport Shuttle’s door-to-door service which takes you straight to your accommodation. 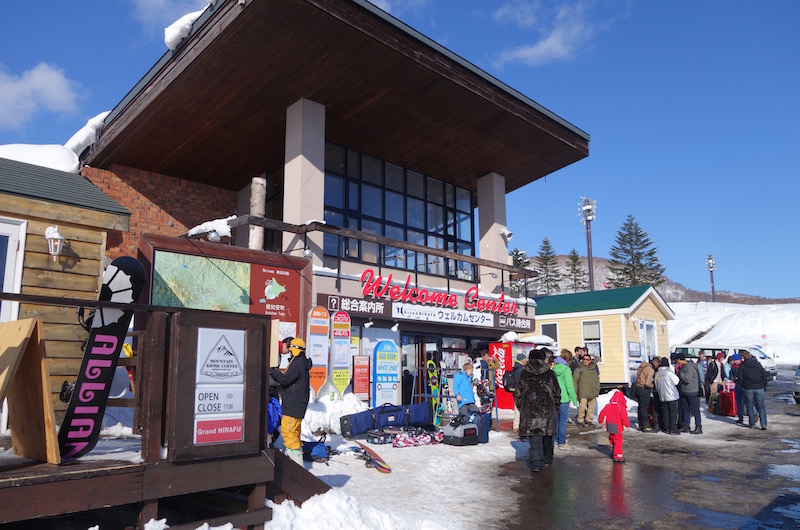 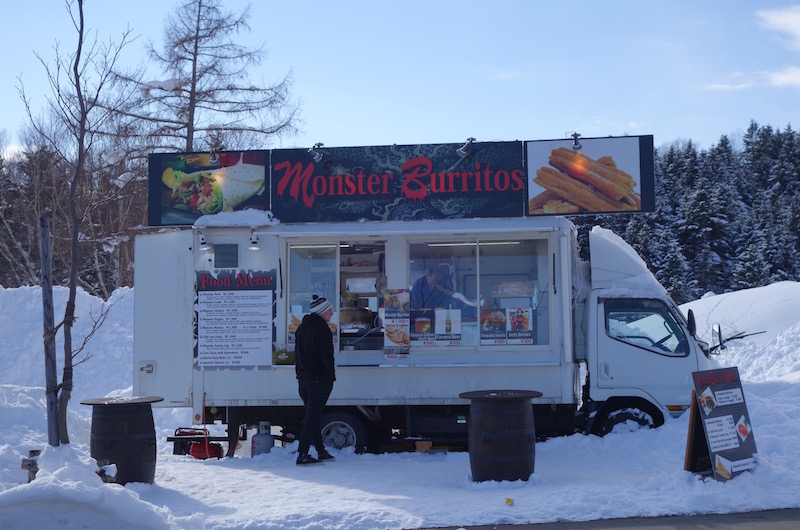 Another funny favourite in Niseko is all of the food vans. I can only compare them to the 3am pizza you have after a big night out. But wouldn’t touch them when you are sober. Actually the cheese tarte was pretty good. 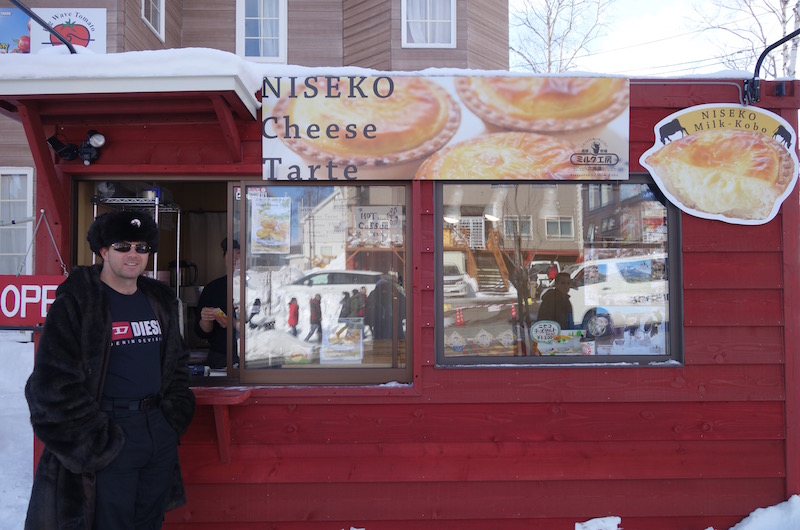 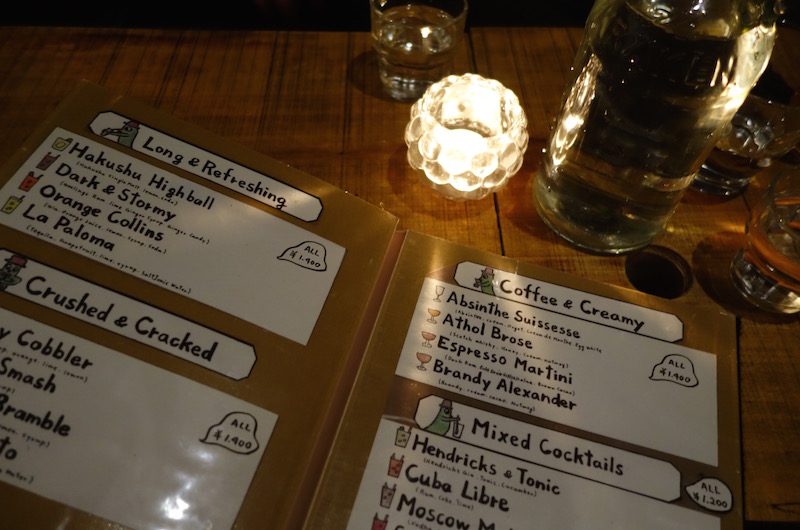 Niseko has a world class dining scene with restaurants to suit all budgets and tastes. Fantastic quality and service is standard whether you pay ¥500 or ¥5,000. 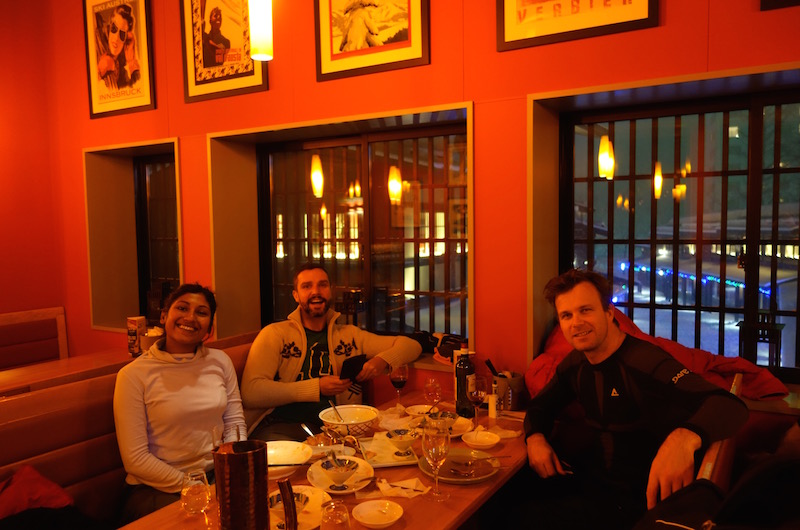 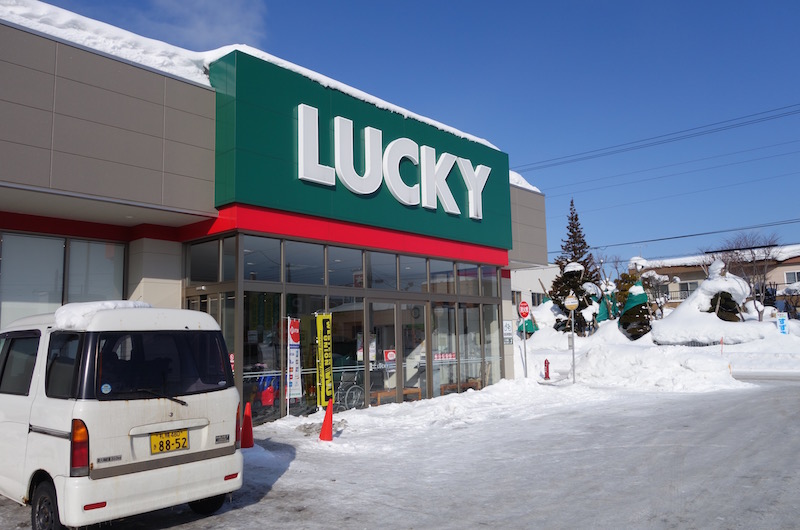 So are you going? We recommend booking with Powderlife.com for accommodation and find a cheap flight online flying into Sapporo. 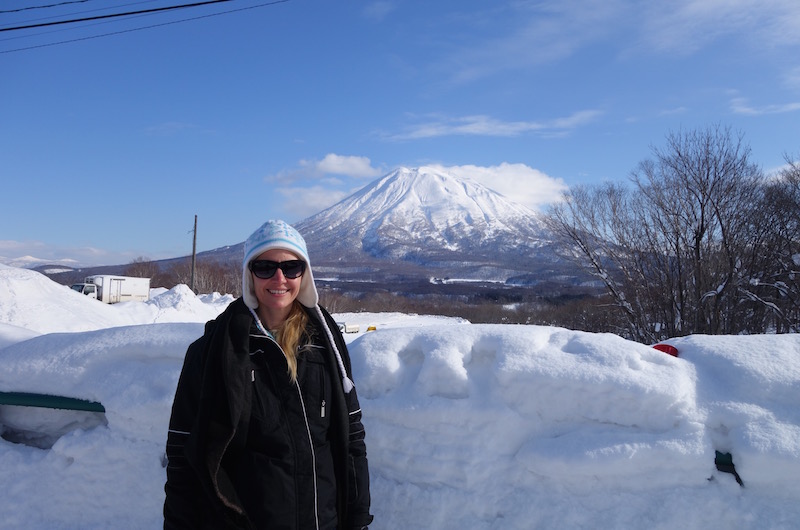